Although concrete pavers are a relatively modern product, the concept is anything but new.

Segmental paving systems have been around since the Roman armies laid the first brick around 500 BC. Fed up with muddy, cumbersome roads that slowed down their troops, they devised a more efficient way of getting around. 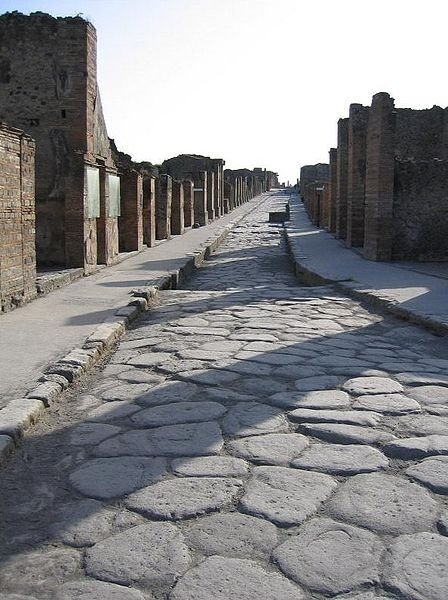 The Romans were a clever bunch. They created deep roadbeds of crushed stone that allowed for proper drainage. On top of the most heavily travelled routes, they added six-sided paving stones that cut back on the dust and reduced drag from wheels. The result was an intricate system of roads that connected cities, major towns and military bases.

At the peak of Roman development, there over 400,000 km of roads, of which over 80,500 km were paved with stones. These roads were so well-designed and well-constructed that despite being neglected during medieval times, many are still in use today, thousands of years after they were first built.

One of the most famous Roman roads that exists today is the ***Appian Way***. It was the widest and largest road of its time, and stretched over 500 km from Rome to the port of Brindisi, on the Adriatic coast. Today, the road is remarkably well preserved. You can stroll along a 15-km stretch of paving stones, worn smooth by millennia of use, and marvel at the monumental feat of engineering that changed the face of roads forever.

This type of stone paving technique continued to be used throughout Europe, but it wasn’t until the 1950s that concrete units began to be produced.

Following WWII, there was a dire need for reconstruction. The Dutch needed to replace clay brick streets damaged by the war, so they started manufacturing dimensionally consistent, hand-sized concrete units. In the 1960s, the Germans jumped on board and developed high-efficiency machinery for the production of interlocking concrete pavers. The technology quickly spread throughout the rest of Europe, as well as Australia, New Zealand and South Africa.

Growth has skyrocketed in other parts of the world as well. Globally, there is at least one square foot produced for every person living on Earth. Every second,1000 pavers are made.

Technology has come a long way since Roman times, but the idea remains the same: Paving stones are beautiful, natural and durable, and are an affordable way to add style and class to any outdoor space.

If you’d like to see paving stones in a modern setting, check out the rest of our website.  And of course if you’d like to know more about bringing this time-honoured tradition to your own property, don’t hesitate to contact us.

Call for a free estimate